Milledgeville, Ga. – Tiffany Slaton, a first-year student at Central Georgia Technical College (CGTC), will put-off her start in the Hemodialysis Technology program to compete in archery competitions at the 2017 NatWest Island Games, June 24-30 in Gotland, Sweden, representing Bermuda as one of 24 island nations present.Slaton, who attends classes on the Milledgeville campus, received the invitation to compete in the games from the Bermuda Archery Association the day before she found out she had been accepted into the competitive Hemodialysis Technology program at CGTC.

Slaton, who attends classes on the Milledgeville campus, received the invitation to compete in the games from the Bermuda Archery Association the day before she found out she had been accepted into the competitive Hemodialysis Technology program at CGTC.Right after, she emailed Brandi Mitchem, assistant director of Enrollment Services, about her participation in the games and how she would be flying out the next day. She hoped to figure out how, with the help of the College, she could compete and maintain her position in the program.

Right after, she emailed Brandi Mitchem, assistant director of Enrollment Services, about her participation in the games and how she would be flying out the next day. She hoped to figure out how, with the help of the College, she could compete and maintain her position in the program.

“The faculty and staff at CGTC are dedicated to providing students with opportunities for achievement.  There are multiple facets that make our students successful and these facets are not limited to academia. Tiffany’s hard work in her academics provided her the opportunity to be accepted in the Hemodialysis Technology program for the summer semester. That same hard work and dedication in archery have now provided her this remarkable opportunity. We wish Tiffany the best of luck and hope she represents well in her competition,” Mitchem said.
Slaton’s seat will be available to her in the fall. For now, her attention is with Bermuda as they train in Sweden where she looks to unleash her “super strength.”
“I have always enjoyed reading about amazing feats, like flying or super strength when I was a little girl,” she said, drawing back to a keen adolescent ability, that made the sport become more to her.   “But the one super strength I thought fit me the best was being able to hit a target at long distances. This super strength, for me, made the stories of characters like Robin Hood and Green Arrow come alive.”
“I received my first bow in my early teens, and as soon as I shot it, something special happened for me,” Slaton said. “I didn’t do anything much with the arrow, but it was always at the back of my mind. Many years later, I went to Bermuda to visit family and read that they had just opened an archery range. It was at this moment in time that I took on the sport for more than pleasure.”
Competing is important to Slaton, as it shows in the three years she has spent commuting back and forth between Milledgeville and Macon to train with an archery group called MWS Smashing Arrows. Her desire to be in the Hemodialysis program is also central.
“My father has had Chronic Kidney Disease (CKD) for over 20 years. During his appointments, I would ask lots of questions about what the nurses were doing. I found them to be extremely professional and knowledgeable about their jobs,” Slaton said.
Visually, the sport appears less physically taxing than others, but Slaton said archery at this level is something one has to be committed to training for.
Slaton routinely channeled her super strength to achieve high enough scores to fit the parameters needed to earn a spot at the Island Games. Prior to the Games, Slaton competed in archery competitions in Georgia, selecting ones that challenged her enough and fit her schedule of studies.
In Sweden, the Island Games will be her first international shoot. Officials will spend the first few days administering drug tests and other competition requirements. The delegation from Bermuda will then practice, train, and start dietary regiments she likes to call, “archery boot camp.”
Slaton will be shooting in the Women’s Recurve and Team Shoot. Both are accomplished by shooting arrows at a target that is 70 meters away, about 230 feet.  In Women’s Recurve, distances of 60, 50, and 30 meters are also shot.
“I love archery and the discipline it takes to use a recurve bow. I am also excited to do my best for the people who have been cheering me on, and I also love being able to continue to give everyone a good show with my archery shooting,” she said.
Slaton will return the second week of July.
For more information about the 2017 NatWest Island Games, visit http://www.islandgames2017.com 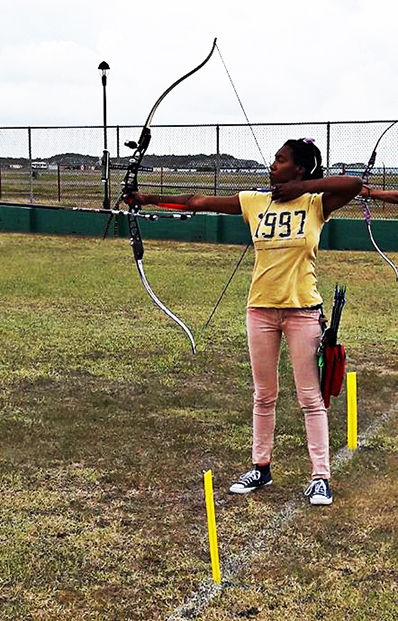 Tiffany Slaton, a first-year student at CGTC, trains in Sweden for Bermuda at the 2017 NatWest Island Games. She is competing for Bermuda and has put off her studies in the Hemodialysis program to do so. *Photo courtesy of Tiffany Slaton.